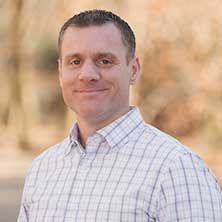 Nick Uva is SVP's Vice President of Business Development. He joined SVP in 2018 after working as Senior Account Executive within Elanco Animal Health - Corporate Accounts Division. He joined Elanco after being part of the asset swap between Elanco and Boehringer-Ingelheim Vetmedica Inc., where Nick worked in a similar capacity as a Senior National Key Accounts Manager since 2010. Nick’s background is comprised of several years in Human Pharmaceutical Sales within Cardiology and Endocrinology. During that time, he spent a 6-month term within Global Marketing at Bristol-Myers Squibb in the Czech Republic in 2005. Additionally, Nick was a fully licensed Financial Advisor with Merrill Lynch’s Private Wealth Management Group and previously worked as an Analyst with Salomon Smith Barney (now known as Morgan Stanley).

graduated with an MBA from the University of Miami in 2005 and completed his undergraduate studies at the Anisfield School of Business at Ramapo College with a BS in Finance in 1999. Nick also holds three certifications, most notably; he earned a Certified Financial Manager designation from NYU’s Stern School of Business in 2001. In early 2018, Nick finalized his Certified Strategic Account Manager Designation, from the Strategic Account Management Association, a multi-industry, internationally recognized program.

Outside of work, Nick’s hobbies include fitness, football, continued education, coaching soccer, & travel. His wife Jamie is a 4 grade elementary teacher and they have two young boys, Anthony & Ryan and a spoiled Cocker Spaniel named Tiki.

Southern Veterinary Partners Honored as No.19 on Newsweek's 2022 Top 100 Most Loved Workplaces List

Southern Veterinary Partners Appears on the Inc. 5000 for the Fifth Time, Ranking No. 1453