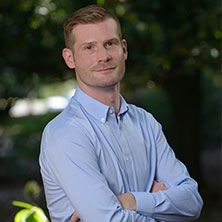 Eric McHargue joined Southern Veterinary Partners as Marketing Manager in 2018. Eric graduated from The University of Alabama in 2011 where he earned a Bachelor of Science in Marketing. After testing the waters with multiple career paths in school, he decided marketing provided the best mix of his two passions: business and arts. While in college, he also served as Graphics Editor for The Crimson White and, although having grown up as an Auburn fan, he became a huge supporter of The Crimson Tide.

Prior to joining Southern Veterinary Partners, Eric spent six years working in marketing roles within various industries, including positions related to digital ad sales, client relations, and project management. Most recently, he served as Marketing Specialist for EBSCO Industries, Inc., a position in which he provided strategic direction for the company’s subsidiaries and developed content for internal communications. His exposure to these various areas within his field has proved beneficial as it has allowed him to provide multiple perspectives when tackling all types of projects.

When he’s not at work, he loves spending time with his daughter - a four-year-old St. Bernard named Summitt. An avid traveler, he will also find practically any excuse to fly to the West coast. You can typically find him in attendance at various philanthropic events throughout Birmingham, especially those benefiting animals, and he welcomes anyone to challenge him to a good old-fashioned karaoke competition.

Eric currently resides in Hoover and looks forward to relocating to the thriving downtown Birmingham area in the near future.